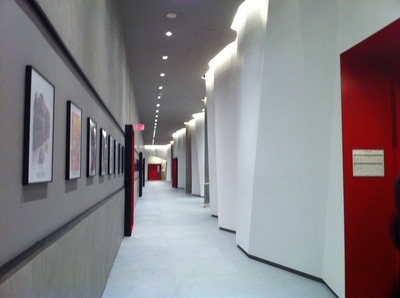 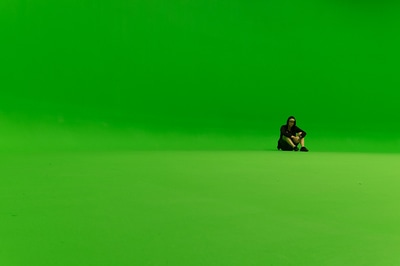 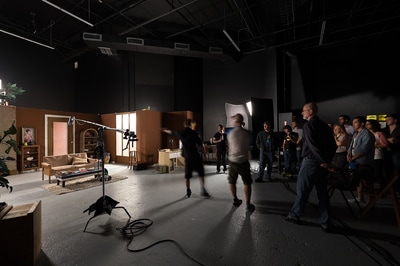 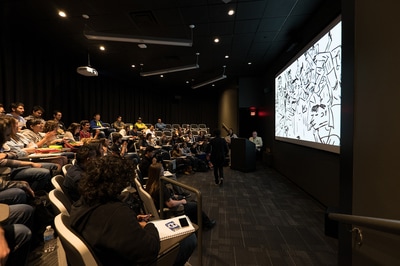 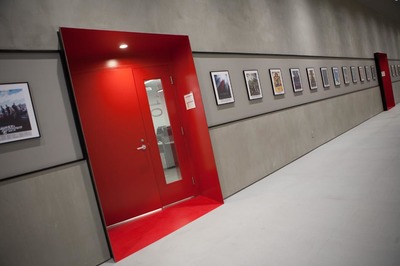 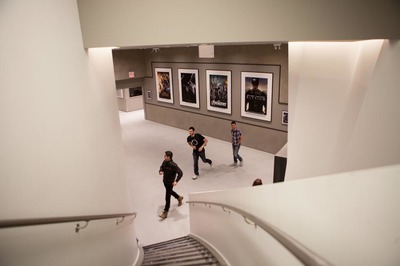 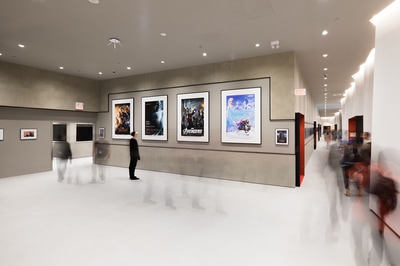 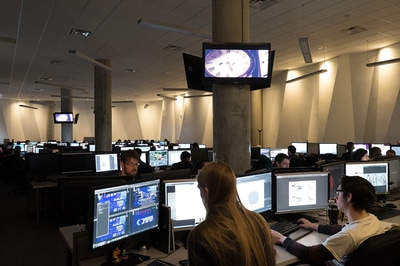 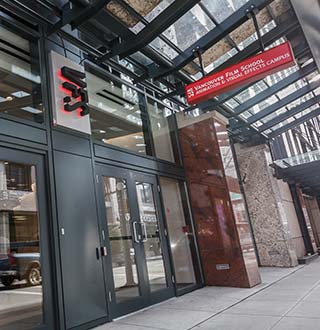 Intro to Mixing
Mixing is an essential part of any finished sound design piece. As the industry-standard software, Pro Tools possesses tools every mixer should know. In this course, the emphasis is on the basic setup of a mix inside Pro Tools. Students compare older analog mixing concepts inside Pro Tools, and by the end of the course, they have a basic mix ready to go.

Intro to Pro Tools
Pro Tools is introduced to students in depth. They're guided through the different windows and basic capabilities of the software, including basic editing, mixing, and mastering. An in-class post-production project is completed as well.

Intro to Sound
Sound design requires an in-depth knowledge of the physical properties of sound. This course introduces students to the physics of audio, specifically how analog and digital audio differ. The physics of audio are covered in depth, and students develop an understanding of “how” sound works students through the practical use of microphones – the first link in the chain of signal flow. Students then learn to set up the analog room, gaining a first-hand knowledge of the essentials of signal flow.

Intro to Portable Recording
Portable recording is the basis for many of the sounds in any good sound designer’s library. Students are encouraged to always be prepared to record sounds at any time. This course covers the five Ws of portable recording as well as some basics in mastering their sounds.

Intro to Post Recording
Post-production studio recording breaks down into two main categories: Foley and ADR. The first four classes of this course concentrate on Foley with the following three classes on ADR, including how ADR is scripted prior to recording and using that script in an ADR session. There is also a review of microphones used for these types of recordings.

Intro to MIDI + Synthesis
MIDI (Musical Instrument Digital Interface) is a protocol in the sound industry that has expanded well beyond its music roots. Students explore the basic concepts of MIDI and also learn fundamental skills with synthesizers.

Post Recording 2
Building on the knowledge gained in Post Recording I, students expand their skills in Foley recording and performance, while also reviewing ADR scripting and recording. This course is primarily driven by practical implementation of previously taught theory.

Portable Recording 2
Students explore different portable recorders available at VFS in addition to the other microphones they are able to use throughout the year. Proper microphone technique is stressed to increase the quality of student recordings.

Intro to Game Audio
Game audio is a rapidly expanding sector of the visual media where sound designers are in high demand. This course introduces students to the concepts, theory, and basic software implementation methods and techniques essential to game audio. As a nonlinear medium, games have an underlying engine driving the sounds and visuals based on player decisions. Understanding the fundamental difference of real-time, interactive audio considerations as compared to post audio is essential. Students explore Python, a scripting language used by many game companies, as a method for understanding that audio for a game is eventually put into code.
​
Intro to Post Audio Editing
Post audio editing is a key part of any film or television soundscape. All sounds used in a film are edited prior to being mixed. In this course, students explore the basic elements of audio editing and develop an understanding of how to start editing each element. Defining the roles and importance of each audio element is necessary to complete the complex soundscapes of today’s films and television shows. This course starts by “spotting” a show with instructors.
​
Mixing 2
Building on Intro to Mixing, Mixing 2 expands how sound designers setup and mix within Pro Tools. Students review a stereo mix setup, including how to setup time-based plugins (reverbs, delays) as well as dynamic-based plugins (compressors, gates). Once students develop a more in-depth analysis of what to accomplish in a mix, they explore automation to expand their mixing capabilities and to create perspectives in a mix. They also use Euphonix mix surfaces to get practical hands-on automation experience.

Post Recording 3
Students continue to develop their skills in Foley and ADR, working with the Acting for Film & Television program for part of the course. They also prep and review how to setup and run an ADR recording session, eventually working on a practical ADR recording session with student actors. Students' work in Foley go deeper, as they progress through in-class workshops and recording sessions led by a professional Foley artist.

Intro to Sound Designing
This course provides a space for students to review their growing arsenal of sound design tools, applying them within the context of creative needs. Building on knowledge from previous courses, students begin exploring synthesis and MIDI in a creative manner while getting more comfortable with Pro Tools. They also start exploring techniques in sound design by "vocalizing" or "singing" how they want their sounds to sound.

Production Sound Mixing
Production dialogue and sound are integral to the post-production audio process. This hands-on course challenges students to learn and apply the technological and soft skills required to become part of sound teams for film and television sets. Each student plays a role on a sound crew in the studio and on a set in this term and the next.

Post Editing 2
In this course, students develop some advanced techniques for audio editing. They learn more challenging, common aspects of audio editing for film and television, such as perspective editing and layering. All classes in this course are delivered in a condensed format to prepare students for the faster pace in later terms.

Sound Designing 2
Expanding on the more nebulous concepts of designing sound, students start using samplers to design sounds and synthesizers to create sounds, while also developing skills in MSP software to complement their knowledge of Max.

Pro Tools 2
This course is designed to orient students in the operation of the Control 24 mixing console and HD3 systems used in the four surround mix labs at VFS.
Mixing 3Students review the many mix routing options available in Pro Tools, exploring more advanced automation techniques using the Euphonix mix surfaces and the Pro Control mixing consoles. A larger focus is spent on broadcast and theatrical delivery specifications and standards. Students submit two separate mixes: a TV music and effects mix, and a theatrical-style film mix for a dramatic film.

Music Editing
Music editing is a form of editing that anyone can do regardless of musical capabilities. Music is, however, an important component of most soundtracks. Students learn about the importance and uses of music in a soundtrack, how editing music to fit or embellish an emotion can be a useful thing, and the role of the music supervisor. Rather than composing, students focus on how to edit music to benefit a soundtrack.

Post Audio Editing 3
Students work on a film from Film Production students in order to gain practical collaboration experience. They are guided through the whole process, taking on the mixing process in the next term.
Intro to Post MixingOne of the most demanding components of any film production is the final sound mix. Students discover how technical the process can be, in comparison to the music industry. They develop a working knowledge of the initial steps and basics of a post-production film mix.

Post Mixing 2
Today’s film and television mixing has changed drastically in recent years. Students discover that it's no longer necessary to work with expensive editing systems, digital and analog tape systems, or multichannel mixing desks to achieve amazing mixes. This course focuses on mixing “in the box”, including metering for proper dialogue levels and when and how to use EQ and Comp. Later, students use advanced automation methods to achieve quick mixing on a control surface and reinforce session setups in mixing labs.

Post Mixing 3
Students are introduced to the mixing consoles in the Sound Design Theatre. They learn the relevant setup features of the room and how to operate the boards, moving on to the different mixing techniques and workflow of a two-person film mix. Through in-class examples, students determine how to better serve stories with strong soundtrack work. They begin focusing on a collaboration with Film Production as their final project, mixing the edited audio they worked on in the previous term. This real-world scenario that prepares students to feel comfortable mixing final films and providing clients with sound deliveries.

Game Audio 4
Using skills acquired in earlier terms, students work on a project of their own choosing for which they incorporate complex Wwise implementation techniques. They are also given an industry-relevant assignment in the form of a test video package (often used as a game industry application requirement). Along with learning to navigate and create sound cues within the UnReal 3 game engine (UDK), students begin considering strategies for finding professional opportunities in the game industry.

Intro to Professional Skills
Students focus closely on how to be successful after graduation. This non-technical course prepares them with the skill set and industry knowledge to find employment in their field.

Professional Skills 2
Building on the knowledge and strategies developed in Term 5, students refine their interview skills and targeted employment outcomes.
Final Post-Production Audio ProjectStudents pick a final visual piece and create the soundscape – typically, these projects are short animated films. A series of one-to-one meetings with instructors guide them through the entire process, which builds towards a feedback session from a panel of instructors and finally an additional panel of industry professionals.

Final Game Audio Project
This course strives to realistically illustrate the important procedures and timelines involved in the professional world of Game Audio. Starting in the final week of Term 5, students will work with an experienced Game Audio professional to simulate the Game Audio studio environment. Students will begin by understanding Audio Design documents, where the initial concept for the game’s audio starts. From there, students will use the knowledge they’ve previously gained in Wwise and Unity to create and fully implement sound in a working game build, provided by the Game Design department.

Portfolio Production
This course introduces students to techniques of Visual Communication Design and Interactive Promotion. Class time is spent working on two design projects: Identity Design and Interactive Site. Through research and development, students will create their own brand mark, and use WordPress to build a basic interactive site to showcase their Sound Design work.